A NORDIC blast has been forecast to sweep Britain later this month, with snow hitting key cities such as  Glasgow, Edinburgh, Blackpool and Birmingham.

In the next two weeks, some areas of the UK could see up to 14in of snow, with the Scottish Highlands worst affected.

Weather forecasters are predicting that heavy snow could start falling as early as next week, and will spread over the following fortnight.

Most of northern Scotland is set to see snow by January 9, and by January 15 it is expected to reach as far south as Birmingham.

First signs of the cold front should be seen tomorrow, where snow is expected in the Scottish Highlands alongside frost in Northern Ireland and rural areas of the north of England.

Southern England is expected to see some rain but will mostly stay dry.

Alex Deakin, meteorologist at the Met Office, said: “Certainly rural parts of the North will see some pockets of frost, though well above freezing in the South with all the cloud and the breeze and the rain.

“For most, Friday is a bright day.”

“We’ll see some sunshine. Yes there will be showers coming into mostly western Scotland, again maybe some snow on the hills.”

He added: “Certainly a significant chill in that wind across Scotland, Northern Ireland and parts of northern England.”

According to data produced by WXCharts, the cold front is set to arrive on Wednesday next week, coming from the west and meeting some frosty air in the north, bringing snow to parts of the Scottish mountains.

The snow could quickly spread across the rest of northern Scotland, reaching as far as Glasgow and Inverness the following day.

By January 13, 26cm of snow is forecast in the Scottish Highlands, with snow showers expected in Manchester and the Lake District. 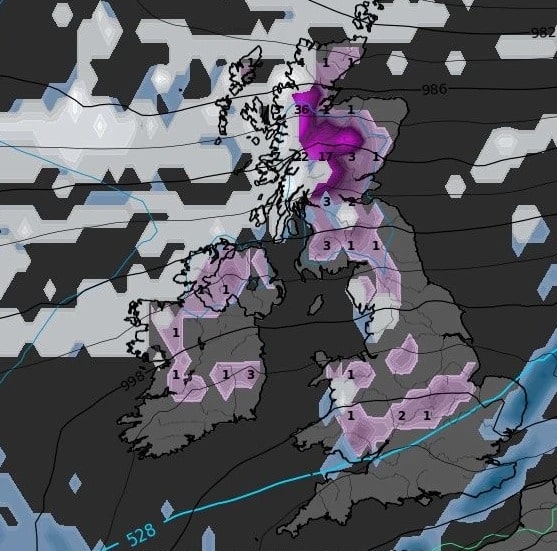 The following day, temperatures in Scotland could fall to as low as -4C in areas of northern Scotland, and to a bitter 4C in London, Manchester and Birmingham.

On January 16, the heaviest fall is expected, with snow forecast to reach Birmingham, Cardiff and Belfast.

By then, areas of northern Scotland like Ullapool and Fort William are predicted to be covered with 37cm, and temperatures are set to hit 0C in much of the north of England.

The Met Office has said they expect snow in Scotland throughout January, as cold air coming from the north fuels a chilling blast.