British troops in Iraq could be at risk after a recent US airstrike that killed Iran’s military chief, former British foreign office minister has warned, as the US embassy in Baghdad urged Americans to leave Iraq.

As one Iranian public figure urged western citizens to “leave the UAE immediately” for their own safety. Former Middle East minister Alistair Burt has said that the US airstrike which killed General Qassim Soleimani was “extremely serious.” 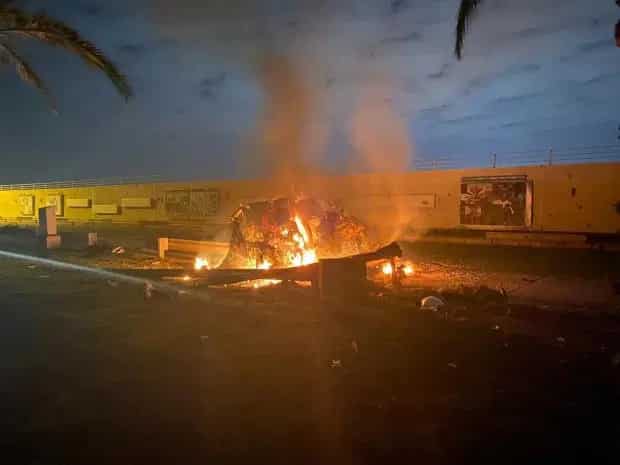 “But there’s no doubt that risks and consequences are much greater this morning than they were before, but they’re unknown on all sides, but the United States would no doubt say that personnel was at risk already from action taken by the Iranians.
“The question is to what extent have any of those consequences been satisfactorily resolved by this action. And it would seem, at this stage, very unlikely that there’s a positive answer to that.”

He also added during the interview that the airstrike could cause “a huge potential escalation” referring to the potential conflict, of which “the consequences are unknown.”

Mr Burt said that it is “very important now to concentrate on what happens next, and for everybody involved diplomatically to do everything they can to try and diffuse the situation”.

And then when Asked whether the UK Government would have been told about the US government’s plans to attempt the airstrike before they happened, Mr Burt added: “I doubt it.

The US embassy in Baghdad has already urged all American citizens to leave Iraq immediately, while an Iran-backed Iraqi militia commander has ordered his men to be ready for an upcoming battle.

It is unlikely any response will be contained within Iraq. Nor will it be a single measure, More than likely we will see a sustained, increased hostility from the regime.
What happens next depends on how far Tehran is willing to allow the confrontation to go.

Will it be satisfied with hitting back at the United States in the wider Middle East region via its proxy forces – a move that might prevent a direct confrontation between the two sides?
Or will the regime choose to strike US interests directly?

It is very unlikely that any attempt will be made to launch a conventional military attack on US soil, such as with a cruise missile – a reminder of the geographic advantage the US holds. But that does not rule out the possibility of cyber strikes.

The Foreign Office has also said it was reviewing the situation but had yet to change its travel advice. “There is no update at the moment but travel advice is under constant review,” said a spokesman.

Dominic Raab, the Foreign Secretary, appealed for calm: “We have always recognised the aggressive threat posed by the Iranian Quds force led by Qassim Soleimani. Following his death, we urge all parties to de-escalate. Further conflict is in none of our interests.”

There are up to 500 British soldiers in Camp Taji, which is around 65 Kilometere’s outside Baghdad, on a training and mentoring mission with the Iraqi forces. The Ministry of Defence said there was no immediate plan to change deployment.