Nirvana sued by baby from the album cover of Nevermind 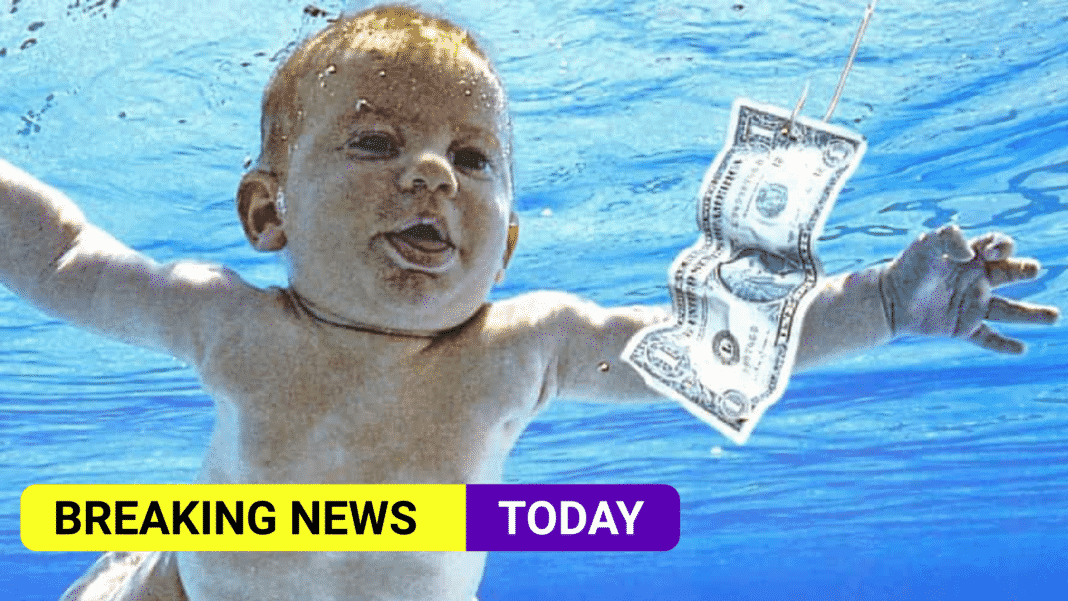 Spencer Elden, who was photographed as a baby on the album cover for Nirvana album Nevermind, is suing the band alleging sexual exploitation

Now 30 years old, Elden says that his parents never signed a release form authorising the use of his naked image on the second studio album from Nirvana.

The cover depicts Elden as a four-month-old baby in a swimming pool, grasping for a dollar bill that is being dangled in front of him on a fishing line.

He also alleges that the nude image on the album cover constitutes child pornography.

“The images exposed Spencer’s intimate body part and lasciviously displayed Spencer’s genitals from the time he was an infant to the present day,” legal papers filed in California claim.

Under United States law, non-sexualised photos of infants are generally not considered to be child pornography.

However, Spencer Elden’s lawyer, Robert Y. Lewis, is arguing that the inclusion of the one dollar bill (which had been superimposed after the photograph was taken) makes the infant boy seem “like a sex worker”.

The legal case is also alleging that Nirvana had promised to cover Mr Elden’s genitals with a sticker, but the agreement was then not upheld.

Elden alleges his “true identity and legal name are forever tied to the commercial sexual exploitation he experienced as a minor which has been distributed and sold worldwide from the time he was a baby to the present day”.

He claims he “has suffered and will continue to suffer lifelong damages” as a result of the artwork, including “extreme and permanent emotional distress” as well as “interference with his normal development and educational progress” and “medical and psychological treatment”.

He is requesting damages of at least $150,000 (£109,000) from each of the 15 defendants, of which includes the surviving members of the band: Dave Grohl and Krist Novoselic; the manager’s of Kurt Cobain’s estate and Cobain’s former wife Courtney Love, as well as the album cover photographer Kirk Weddle.

Representatives for both Nirvana and their record labels are yet to have responded to the claims.

However, he has sometimes expressed an ambivalence about the photoshoot. In 2016, he said to Time Magazine that he “got a little upset” about the notoriety he gained as he grew older.

“I just woke up already being a part of this huge project,” he said. “It’s pretty difficult – you feel like you’re famous for nothing.

This comes after a plan to start offering coronavirus booster vaccinations in the UK from early September is extremely unlikely to happen, members of the government’s vaccines watchdog believe.

“It’s hard not to get upset when you hear how much money was involved,” he continued. “[When] I go to a baseball game and think about it: ‘Man, everybody at this baseball game has probably seen my little baby penis,’ I feel like I got part of my human rights revoked.”

In previous interviews, Mr Elden has been more upbeat about the image.

“It’s always been a positive thing and opened doors for me,” he said to the Guardian six years ago. “I’m 23 now and an artist, and this story gave me an opportunity to work with Shepard Fairey for five years, which was an awesome experience. He is a huge music connoisseur: when he heard I was the Nirvana baby, he thought that was really cool.”

The second studio album from Nirvana, which included the hits Smells Like Teen Spirit, Come As You Are and Lithium, went on to sell a total of 30 million copies around the world.