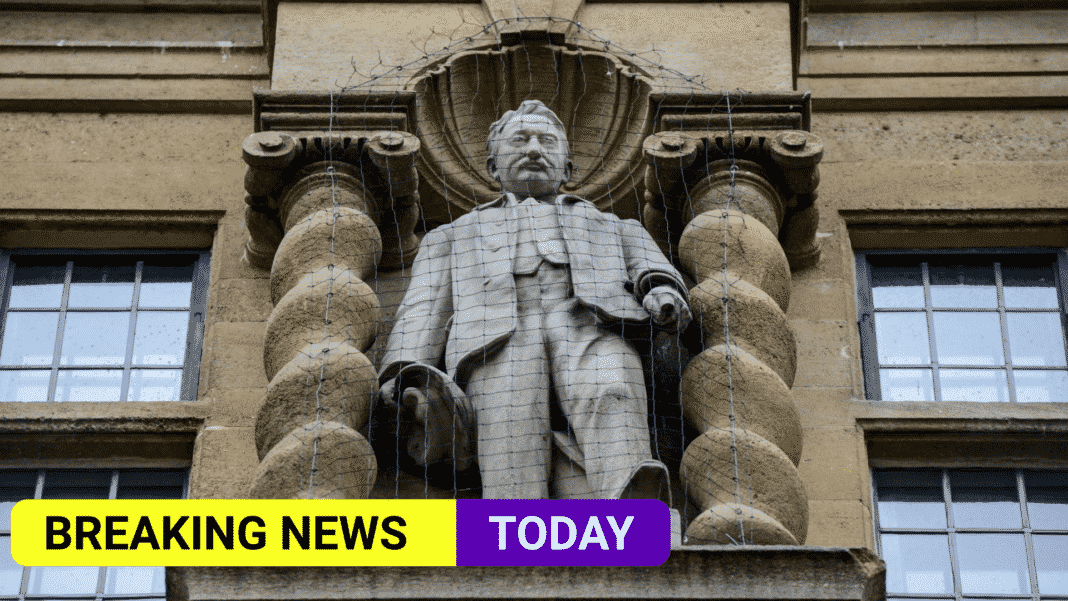 For years Oxford campaigners have been calling for the removal of the statue at Oriel College, saying that Rhodes was a man who stood for white supremacy and racism.

But last month the college had decided not to take it down as a result of practical reasons.

Now, some academics are boycotting Oriel College and have signed a petition saying that the statue “glorifies colonialism”.

They are refusing to give any tutorials to undergraduates from Oriel College or attend any talks there, as was first reported on within the Daily Telegraph.

Oriel College has so far declined to comment on the ongoing issue when contacted.

Cecil Rhodes was both a businessman and politician who played a large role within southern Africa in the 19th Century. He thought of the English as being a master race, and his critics see him as being the ultimate representation of colonialism and one of the people who had helped pave the way of apartheid in South Africa.

This comes after the United States president will tell fellow leaders during this week’s G7 summit that the gains of peace since the Good Friday Agreement between the British and Irish governments must be protected, Jake Sullivan has said.

He had been a student at Oriel College, and his statue is now above a doorway of the building that is named after the man.

Oriel College’s governing body said last year that the majority of its members had wished for the statue to be removed. But following an inquiry, the college decided it wouldn’t remove it, as a result of the cost, as well as the complex planning processes.

The Oxford lecturers said that the decision of the college not to remove the statue “undermines us all”, and that the whole university can only work to eradicate racism if all of its colleges do so.

“Faced with Oriel’s stubborn attachment to a statue that glorifies colonialism and the wealth it produced for the college, we feel we have no choice but to withdraw all discretionary work and goodwill collaborations,” a statement from the boycott organisers said.

As well as refusing to tutor any Oriel College students, the dons will also not help the college when it interviews admissions candidates or attend talks sponsored by it.

The boycott does not include work that is not discretionary, such as exams, delivering lecturers and supervising postgraduate students.

The dons said the boycott was done “with regret”, but would continue “until Oriel makes a credible public commitment to remove the statue.”

There have been some creative ideas of what to do with controversial statues, if they are removed.

Some have suggested just leaving the space empty, while sculptor Antony Gormley has suggested turning the Rhodes statue to face the wall.

This comes after a statue of a Black Lives Matter protester has been taken down after it suddenly appeared on the plinth that was previously home to the monument of slave trader Edward Colston in Bristol, after it was secretly installed.

One of the academics to sign up to the boycott is Robert Gildea, professor emeritus of modern history at Oxford University.

He told BBC Radio 4’s Today programme it was a way of putting pressure on the college after alternative attempts had not worked and said taking no action was “not acceptable”.

The graffitied statue of slave trader Edward Colston in Bristol that was toppled during a Black Lives Matter protest last year is now being displayed at a museum.

Any decision to remove the Rhodes statue would require listed building consent from Oxford City Council, Historic England and the secretary of state for local government.

Announcing its decision last month, Oriel said: “In light of the considerable obstacles to removal, Oriel’s governing body has decided not to begin the legal process for relocation of the memorials.”