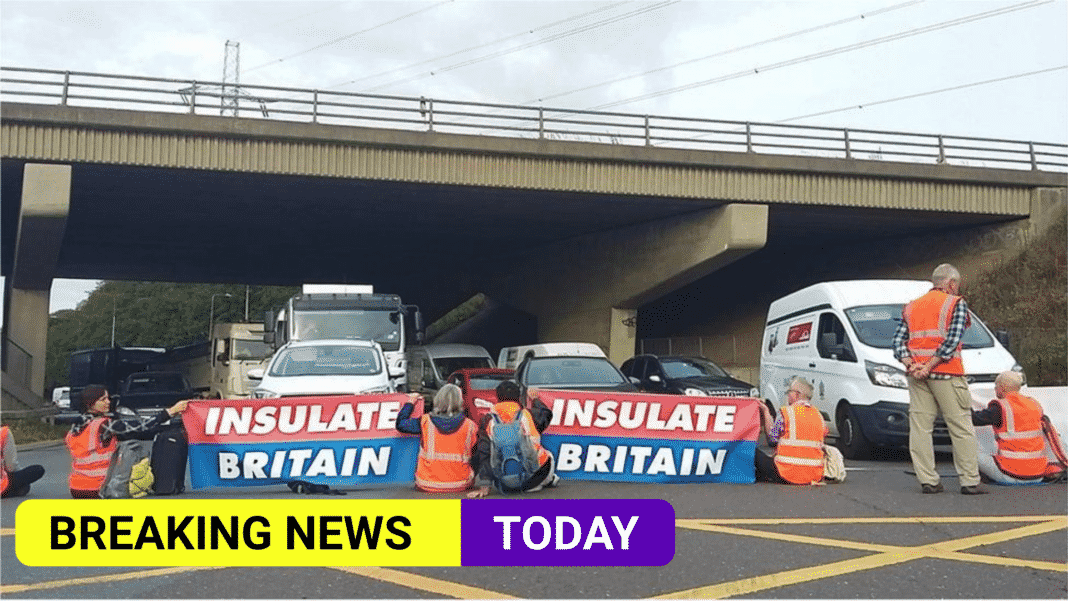 At least 30 people have since been arrested after the climate protestors blocked several slip roads on the M25, causing massive delays

Protestors blocked at least five junctions on the M25, causing miles of queues along the motorway. Footage shared on social media platforms showed angry drivers attempting to drag the protestors from the road.

Police had warned motorists to avoid parts of the motorway following demonstrators sitting on the roads amid rush hour.

Essex Police have arrested 12 people, while Hertfordshire Police said that 18 people have now been arrested.

Surrey Police said that “a number of people” had been arrested, but they did not confirm a specific figure.

Protestors for Insulate Britain had blocked the slip roads at a number of junctions just after 8am on Monday morning, including junction 3 from Swanley, junction 6 in Godstone, junction 14 for Heathrow and junction 20 for Hemel Hempstead, as well as junction 31 for Lakeside.

A number of the roads have since been reopened, but are now experiencing residual delays as a result of the protests.

Superintendent of Hertfordshire Police Adam Willmot said: “We were called to reports of a protest at around 8am today and quickly mobilised resources to the scene.

“The M25 was closed westbound at junction 20, resulting in congestion and delays on both the M25 and the A41.

“Protestors ignored police requests to move location, so we took robust action to enable roads to be reopened and to remove the protestors causing obstructions.

“Our officers dealt with the disruption as quickly as possible, reopening routes for local businesses and residents.

Chief Inspector of Essex Police Paul Austin added: “This incident caused significant disruption and our officers worked to resolve it as quickly and safely as possible.

“I want to thank the drivers affected for their patience and understanding.”

One motorist said that there were around 2.5 miles of queueing clockwise this morning on the M25 at junction 14 .

Footage that has been shared on social media platforms showed angry drivers attempting to drag the M25 protestors from the road.

Video had also shown protestors moving out the way in order to allow an ambulance to pass through their blockade.

“[A number] of protesters from Insulate Britain are at the location, slip road closed+diversion being set up. No arrests made at this stage. Pls avoid the area for the time being.”

Kent Police added: “Motorists attempting to join the M25 from Swanley, at junction 3, may encounter delays due to an obstruction caused by a group of people.

“Our officers are at the scene and engaging with those involved. Traffic is moving and being diverted to join the M25 at junction 4.”

Insulate Britain is a climate campaign group that was launched by members of Extinction Rebellion who want the UK government to reduce home heating emissions in the country to zero.

The protest group said today’s disruption was “just the start”, adding: “Actions will continue until the government makes a meaningful commitment to insulate Britain’s 29 million leaky homes, some of the oldest and most inefficient in Europe.”

However, the AA has said that the protest “backfires” in terms of its environmental impact as a result of more vehicle emissions.

Edmund King, AA president, said: “This action is not only incredibly dangerous in potentially putting lives at risk, but it also backfires in environmental terms by causing more delays and more vehicle emissions.”