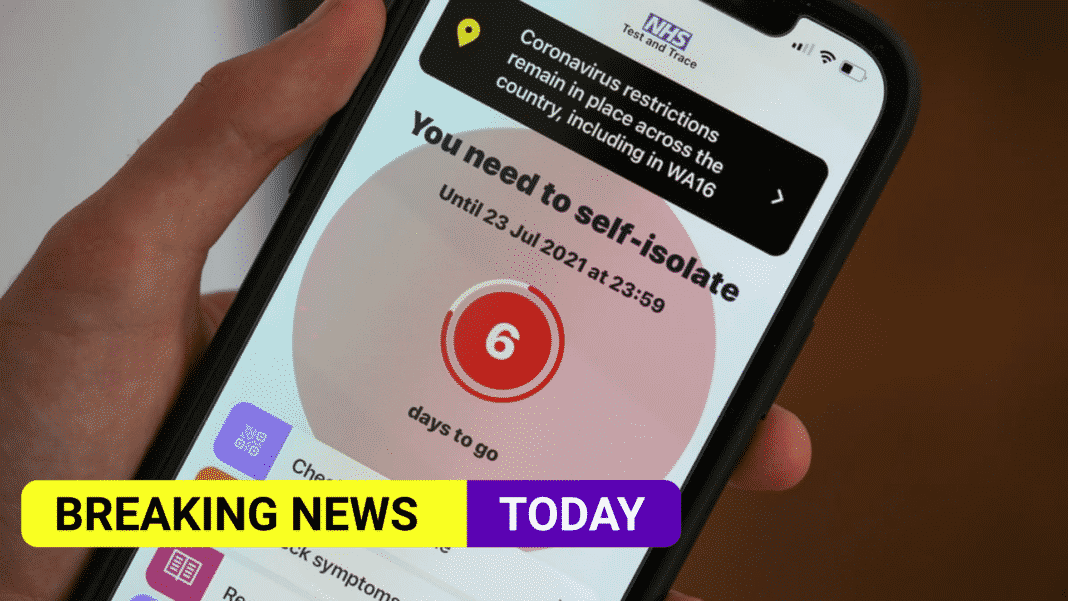 The NHS COVID-19 app pinged a record 618,903 people in England and Wales in a week, latest figures show

Approximately, a further 428,000 people had been contacted by NHS Test and Trace contact tracers in England after being pinged by the app and told to self-isolate in the week up to the 14th of July, with 259,265 people having tested positive.

The NHS app alerts were sent to users of the app in the week leading up to the 14th of July, telling them that they had come in close contact with someone who tested positive for the coronavirus and that they would be required to self-isolate.

A further approximately 428,000 people had been contacted by NHS Test and Trace contact tracers in England and told that they would need
to self-isolate in the week up to the 14th of July, the latest figures show that about 90% of those 475,465 people had identified as close contacts of cases of COVID-19.

This came following 259,265 people tested positive for the coronavirus in England at least once within that same period, up 33% on the previous week.

This comes after a 3% pay rise from the UK government to NHS staff within England has been heavily criticised as being “paltry”, “appalling” and “shambolic” by medical union leaders. Those who are receiving the increase, which is backdated to April of 2021, include nurses, consultants, paramedics, and dentists, as well as salaried GPs.

It is the first set of figures that has been released since the majority of the nation’s COVID-19 lockdown restrictions were lifted within England on Monday.

Many experts had been predicting that the easing of regulations would lead to a possible surge in cases as the coronavirus now spreads rapidly through the unvaccinated population, which is currently standing at 12% of adults, as well as almost all of children within England.

On Tuesday, it had been revealed that over one million children in England were off school last week as a result of coronavirus-related reasons.

While nearly 7 out of 10 adults have the protection of two doses of a vaccine, currently, all of them are required to isolate if they are told to by NHS Test and Trace.

And on Tuesday, Downing Street said that it was “crucial” that people isolate themselves when the NHS COVID app pings them.

Business Secretary Kwasi Kwarteng , speaking to Kay Burley on Thursday, said that the UK government was “very concerned” about the numbers of people who are being pinged by the NHS COVID-19 app.

Mr Kwarteng said that government ministers were “monitoring” the current situation and would be setting out a list of exempt critical workers “very soon”, with the expectation that these new rulings will be published on Thursday.

The consequences of what has now been referred to as the recent “pingdemic” has been reports of empty shelves in some of the nation’s supermarkets, businesses left without staff and delays in supplies reaching consumers.

Ian Wright, chief executive of the Food and Drink Federation, told Sky News’ Ian King Live: “The situation is concerning and it’s up and down the supply chain.

“Increasingly the cause is pinging and it’s getting worse. In manufacturing, it’s certainly a problem. It’s particularly a problem in abattoirs.

“There’s been a lot written about the issues of distribution drivers and HGV. And we know from this morning’s coverage that there were really severe problems in hospitality as well… Where it’s happening, it’s bad.”

The British Retail Consortium (BRC) urged the government to act.

BRC chief executive Helen Dickinson told BBC Breakfast: “The most important thing for government to do is to recognise that the current situation is untenable.”