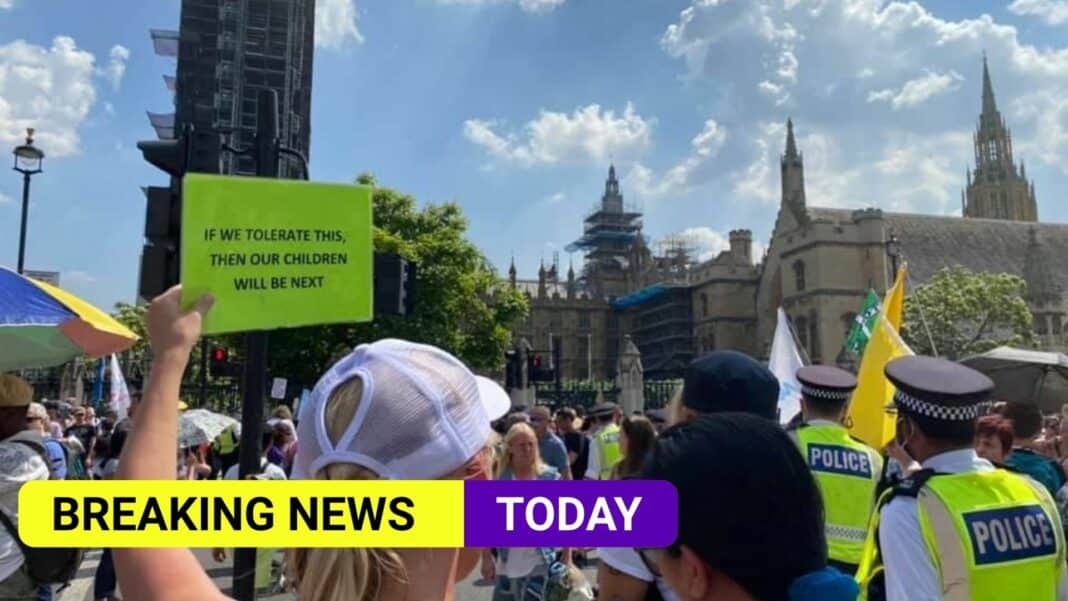 Anti-vaccine activists, Anti lockdown protestors and parents concerned about the vaccination of children will come together for a massive protest in London this Saturday, the 24th of July.

The groups claim to be bringing along large music floats for entertainment to draw a large crowd.

This comes following the protest held outside Parliament on Monday the 19th, where 11 were arrested for gathering near Parliament Square.

The protestors moved from Parliament Square to block the road and up to the gates of the Palace of Westminster, leading Police officers to push protesters out of the road.

Retired Police Constable Mark Sexton has become a social media star for building a case against the Government.

Making claims that many members of Parliament are knowingly and willfully causing death, harm, and loss to many millions of people across the United Kingdom.

Mark claims that there is irrefutable, undeniable, factual evidence to show that the PCR tests are 100% false, fraudulent and not fit for purpose.

He also claims to have irrefutable evidence the SARS-CoV-2 virus has never been isolated or purified; he claims that his evidence means the whole pandemic is a fraud.

He also claims virologists worldwide are deliberately silenced and removed from social media platforms for going against the scripted narrative.

The video which went viral on social media can be found below:

The organisers claim that the demonstration taking place on Saturday, the 24th will be a friendly demonstration, and details of the location will be shared via their social media on the day.

They fear that the Government may have just made things worse by announcing that Only double-vaccinated are to be allowed in nightclubs from the end of September.

It is thought that many people that refused the jab will want to stand up against the government decision.

Many people think that this is just the beginning of the restrictions to be put in place and feel the measures are far more drastic than needed.