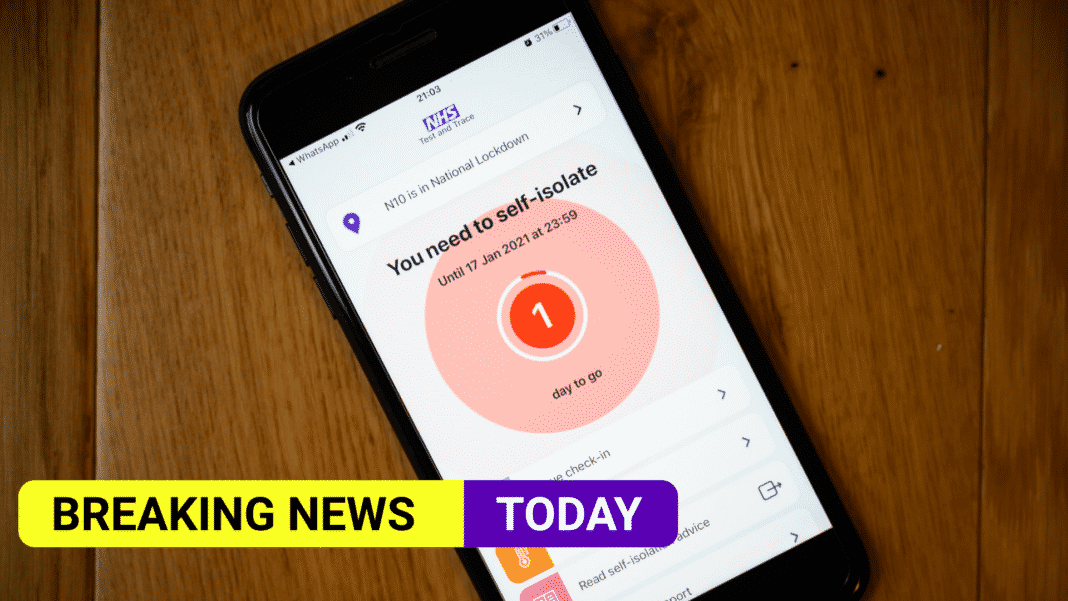 Greene King has closed 33 of its pubs in the past week due to staff self-isolating due to the app.

Chief executive Richard Walker has said: “The great irony is that we’re now all getting vaccinated.”

Boss of Greene King, Nick Mackenzie, said that the pubs group had also had to shorten opening hours at some of their sites. He added that across the hospitality industry within the UK, about one in five team of their members have been affected, “and therefore it is causing a real issue for us setting-up a business on a daily basis”.

Iceland has said that after keeping all of its stores open during lockdown, it has now had to shut some due to 1,000 staff having been “pinged” by the official NHS app.

Recent figures have shown that more than 500,000 people in England and Wales were “pinged” by the app in the week leading up to the 7th of July, up 46% on the week previous.

Those who have come into close contact with someone who has tested positive for the coronavirus must self-isolate for up to 10 days.

Vauxhall had confirmed on Monday that it has reduced its daily shifts from three to two at its plant in Luton “because of increasing numbers of employees who have been contacted by the app”.

A spokesman for the British carmaker said that Vauxhall was about to embark on its yearly three-week shutdown from Friday, the 23rd of July. By the time the Luton plant restarts in August it hopes “the situation will have improved”.

Others in the car industry have also been affected by high levels of staff self-isolating. Nissan and Rolls-Royce have both warned that staff shortages could affect production.

At the weekend, Marks & Spencer said that it may have to reduce store opening hours, while a leading supermarket, which declined to be named, told the BBC: “There’s a risk that there won’t be sufficient staff to open shops”.

Iceland’s Mr Walker said that as well closing some stores, the chain has also had to reduce opening hours in some circumstances. “The concern is that as this thing rises exponentially as we’ve just been hearing. It could get a lot worse a lot quicker,” he told the BBC’s Today programme.

Mr Walker said 4% of Iceland’s 30,000-strong workforce was now absent. “In fact, we’ve just announced employing an additional 2,000 people on top of that to give us a deeper pool of labour, because so many people are now getting pinged.”

The number of Covid cases in England and Wales surpassed 50,000 on both Friday and Saturday, the highest number since mid-January. On Monday, England lifted final Covid restrictions, including the legal requirement to wear a face covering to prevent the spread of the virus.

Wales is expected to scrap most rules on 7 August though this will not include face masks. Scotland has moved to the lowest level of restrictions of Covid restrictions but face coverings must be worn for a further three weeks. Northern Ireland will decide on Thursday to ease rules on seven days’ time.

PureGym‘s chief executive, Humphrey Cobbold, said his business had managed to keep all of its sites open despite rising numbers of employees forced to self-isolate, but it had been difficult.

“Up to 25%, in some areas, of our staff have been asked to self-isolate,” he told the BBC.

“Through flexibility and sharing of labour across sites, we’ve been able to keep sites open so far but it’s been a very close call in certain circumstances.”

Kate Lester, founder and chief executive of Diamond Logistics, which runs a UK network of fulfilment and delivery centres, said the company has had to delay opening a new site at Motherwell in Scotland because between 20% and 25% of staff are off work.

“We’re actually having to delay that launch for over a month which deprives our new network partner of his income and in addition to that it deprives his clients of vital logistics services,” she said.