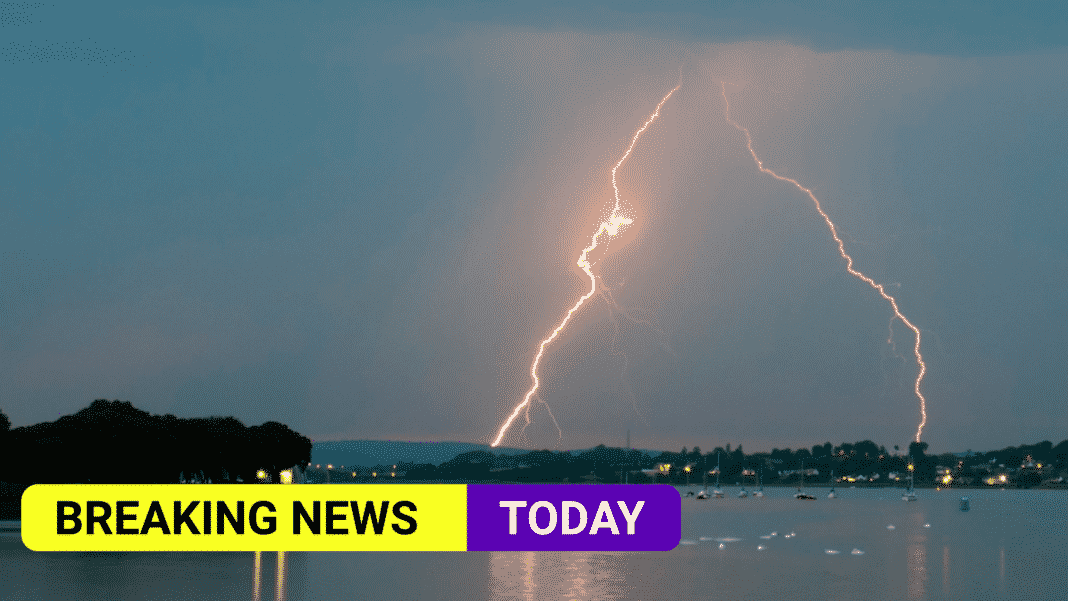 The Met Office has issued a yellow weather warning as thunderstorms cover vast swathes of the country, with London Mayor Sadiq Khan saying “the dangers of climate change are now moving closer to home”.

Both thunderstorms and heavy showers are set to hit much of the United Kingdom today with up to 60mm of rainfall to take in some places within a period of three hours.

The Met Office forecaster has issued a yellow weather warning as a result of thunderstorms covering vast swathes of England, with forecasters warning of the potential disruption.

The warning for thunderstorms runs up until 6am on Wednesday, while a separate and more serious amber thunderstorm warning is currently in place in Scotland until midnight on Wednesday, with weather forecasters saying that “heavy thundery showers will bring some travel disruption and some localised flooding”.

The Met Office has said that up to 60mm of rain could end up falling in some areas, as both heavy showers and thunderstorms develop into Wales, as well as both northern and central England.

In a statement, it said: “These will last well into the night across north Wales and north-west England in particular where they could be prolonged in places.

“20 to 30mm of rain is possible in around one or two hours, and a few places could see around 60mm in three to six hours. Lightning and hail may pose additional hazards in a few locations.”

It comes following torrential rain flooded has parts of London and the South of England on Sunday.

London saw nearly an entire month’s worth of rainfall with homes, roads and Tube stations being flooded, with a flooded hospital cancelling all surgery and outpatient appointments on Monday as a result of the heavy rain.

Sadiq Khan, the Mayor of London, said recent flooding within the capital shows “the dangers of climate change are now moving closer to home”.

He said that the emergency services and local councils within London had hundreds of calls regarding the weather both on Sunday afternoon and later in the evening.

He added: “The serious flash flooding in London over the last two weekends will have caused major concern and anxiety for many Londoners and it shows that the dangers of climate change are now moving closer to home.

“Despite having limited powers in the area, it remains a key priority for myself and London’s council leaders that more is done to urgently tackle flooding and the other impacts of climate change.

“This is why I have brought together all of the key partners to see what more can be done, including the water companies who have to address the localised issues with infrastructure that may exacerbate the impact of flooding.”

On Sunday, the wettest part of the country was St James’s Park in London, where 41.8mm of rain fell.

The average rainfall for July in London is 45mm, meaning nearly a month’s worth of rain fell in one 24-hour period.

The daily rainfall value of 41.8mm recorded at St James’s Park is that weather station’s second-wettest July day on record.

The recently re-elected mayor added: “I continue to lobby the government to devolve more funding and powers to local leaders to enable us to deal with both flooding and the wider impacts of climate change.

“COP26 this year provides an opportunity for the government to show global leadership and give us the powers and resources we need to take even bolder action on climate change.”