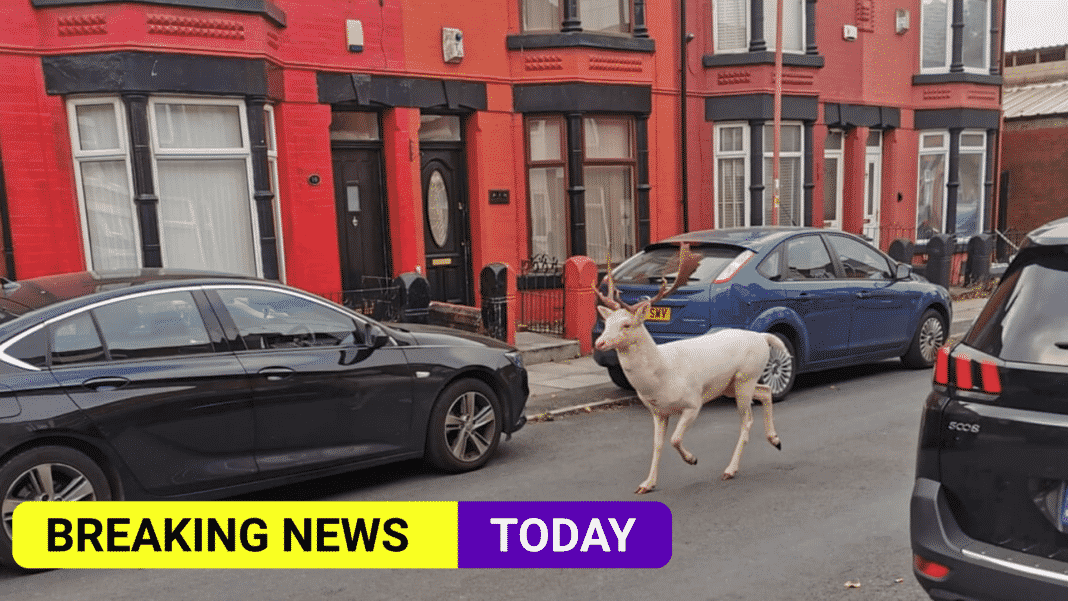 Police said that the stag could not be left to find its own way to safety because it was becoming distressed and creating danger for motorists and members of the public.

Merseyside Police has said that they had received many calls from people who had seen the animal on the streets on Sunday morning.

An NHS worker called Paula told the Liverpool Echo: “I was on my way to work at the Royal this morning.

“As I came over the flyover in Seaforth, there was a police car at the lights at the top of Knowsley Road and as the officer approached off it ran towards Bootle.

“It must have been have been quite scared and I genuinely have no idea where it was from.”

Police said there were “concerns for safety for motorists” as the deer dashed across roads and became distressed.

They said that the animal was able to be secured on an industrial estate where a vet could monitor its welfare.

The RSPCA said it had advised officers to let the deer find its own way home to the forest or parkland it had come from.

But the police had said that there was “no option to let the deer wander as it could be a danger to motorists and members of the public in the area”, particularly as the later hours approached.

“As a result a decision was made in the early evening to euthanise the deer,” Merseyside police said in a statement.

This comes after thousands of people, including key NHS staff and teachers have said that they are unable to get to work due as a result of the national fuel shortage crisis, with some facing the prospect of potentially returning to working from home where possible.

The RSPCA has said that where public safety is concerned, it is a decision for the police. One option could have been to sedate the animal, and move it to a safer place to be released, but that would have taken some caution in a public area to avoid the stag being startled and running when hit by the anaesthetic dart. “This could create a bigger public safety and animal welfare issue,” the animal welfare organisation added.

A spokesperson said: “Although deer traditionally live in forests, moors and parkland, they are becoming more common in urban environments across the UK. We do see deer in city centres – they usually live in large park areas but will follow canal paths and tramlines to make their way in and out of the cities.”

Videos and photos had appeared on social media platforms showing the wild white deer, going through a park and then wandering onto an industrial estate in the area.

In 2019, a deer was spotted within Manchester city centre, running through the busy the Oxford Road area and swimming in the canal. An RSPCA spokesperson said at the time that it had managed to get free and run away from officers.