Russia accuses US of meddling as thousands arrested at Navalny protests 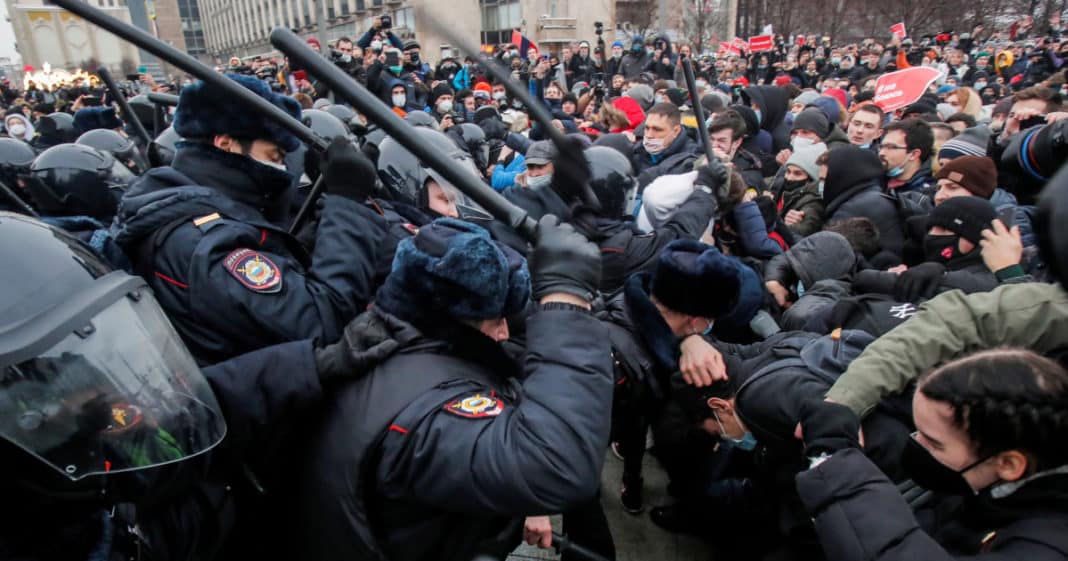 The Kremlin accuses the United States of interfering in Russia’s domestic affairs after downplaying the scale of the weekend’s protests, when tens of thousands of Russian citizens rallied in support of the jailed opposition politician Alexei Navalny.

Russian President Vladimir Putin would respond in kind if the new US administration showed a willingness to talk, a spokesperson for the Kremlin said on Sunday, while also accusing Washington of meddling in the mass protests, in support of detained opposition leader Alexei Navalny, taking place across the country.

Russia has also downplayed the scale of Saturday’s demonstrations, which saw the nation’s police detain over 3,000 people and use force to break up the rallies across Russia.

Riot police detain a demonstrator with a bloody face during a protest against the jailing of Alexei Navalny in Pushkin square in Moscow, Russia.

This comes after the Putin critic and opposition leader in Russia who had been poisoned, Alexei Navalny, has been detained by Russian police following his return to his home country.

Riot police detain a demonstrator with a bloody face during a protest against the jailing of Alexei Navalny in Pushkin square in Moscow, Russia.

Prior to the protests, the US Embassy in Moscow had issued a “Demonstration Alert”, warning US citizens to avoid the protests and naming the venues in Russian cities where protesters planned to gather.

“Of course, those publications are inappropriate,” Kremlin spokesman Dmitry Peskov told Rossiya 1 TV on Sunday, according to Interfax news agency.

“And of course, indirectly, they are absolute interference in our internal affairs. So, this is a direct support of the breach in the Russian Federation’s law.”

“No, only a few people went out, many people voted for Putin,” Mr Peskov said, according to the TASS news agency.

Mr Peskov added that the Russians have supported constitutional reforms proposed by the president. Changes to the constitution will allow Mr Putin to stay in power until 2036.

Mr Putin was one of the last global leaders to congratulate Mr Biden on his victory in the US presidential election after the vote on the 3rd of November.

One of the burning issues to be resolved by the two global nuclear powers is the arms control treaty, which is known as New START, which is due to expire on the 5th of February.

This comes after, referring to it as “Putin’s biggest secret”, Mr Navalny and his team have revealed new details about the sprawling complex that is located near the resort town of Gelendzhik which has long been rumoured to be belonging to the Russian president Vladimir Putin.

The White House said last week that President Biden would be seeking a five-year extension to the deal, while Russia has requested concrete proposals from the United States.

Washington was joined by the European Union, as well as the United Kingdom, in condemning the Russian security forces’ handling of Saturday’s protests, while the foreign ministers of Italy and France both expressed support for sanctions against Moscow on Sunday.