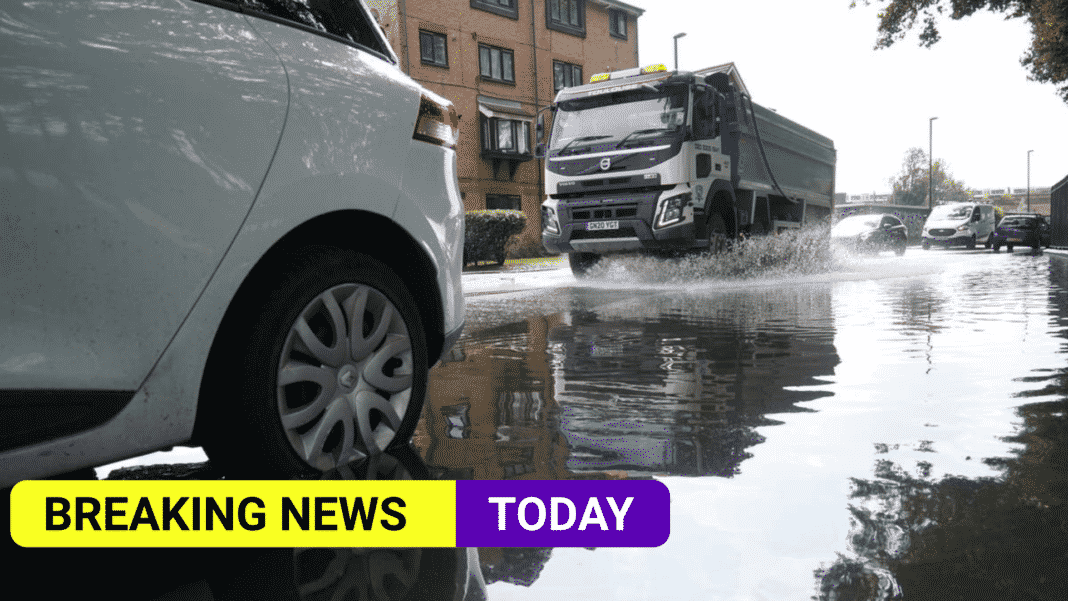 Forecasters have said that the wet conditions could also cause transport disruption, difficult driving conditions, power cuts, and floods in some homes and businesses.

An amber warning was put in place across both in London and the South East until the early hours on Thursday morning, with the Met Office warning that there would be “very heavy rain”.

Forecasters said the wet conditions could also cause transport disruption, difficult driving conditions, power cuts, and floods in some homes and businesses.

This comes after Business Secretary Kwasi Kwarteng has insisted that there will not be another nationwide lockdown following an NHS leader warning the Prime Minister that ‘Plan B’ Covid restrictions must be enforced immediately in order to prevent the country from “stumbling into a winter crisis”.

A yellow rain warning covering a larger part of southern England overnight expired at 3am on Thursday.

Wet and windy weather is likely to bring “some disruption” to the region, forecasters said.

Met Office forecaster Becky Mitchell told the PA news agency that some areas were facing 15mm to 25mm of rainfall – but some places potentially saw 30mm or higher along with rumblings of thunder.

She warned that strong winds – typically about 45mph on the coasts but increasing to 70mph – could also cause disruption to commuters, with the thunder increasing the risk of power cuts.

The rainy weather is expected clear on Thursday across southern England but there could be some more showers in the north and west.

It will be much brighter but colder than of late on Thursday in parts of the UK.

Looking ahead to the weekend, a cold start and scattered showers are expected on Friday.

Rain, stronger winds and milder weather is going to spread from the northwest on Saturday.

It will be colder over the next few days, with quite a raw wind – but many places will be fine.

Thursday morning will be noticeably colder than of late, with an early frost in some sheltered northern and western parts.

This comes after the Queen has cancelled her trip to Northern Ireland today and has “reluctantly accepted medical advice to rest for the next few days”, Buckingham Palace has said.

Most places will be dry and sunny, after overnight rain over southern England clears, but there will be showers in the north and west.

They will be wintry on northern hills.

It will be much colder than it has been, with a raw wind in the north and east and gales near north-eastern coasts. The afternoon will bring a few showers into the Midlands, but there will be little change elsewhere.

Friday will be dry and sunny for most, but showers will run into many western coastal areas, extending into more of central England later.

It will be cold again, after a frosty start for some, but it won’t be quite as windy as on Thursday.