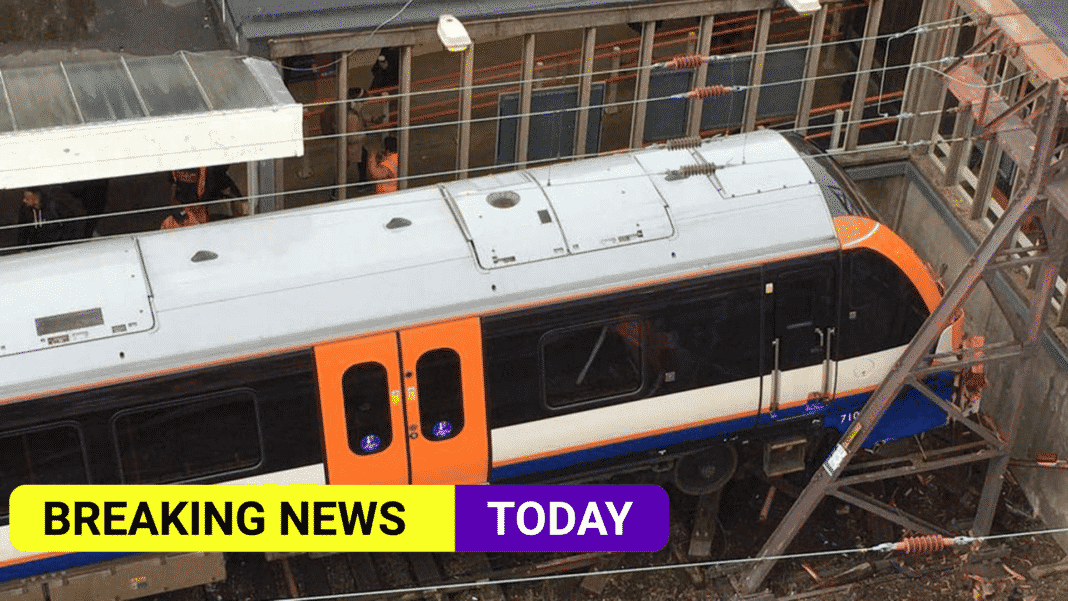 Pictures from the scene in north London has shown the train derailing, but remaining upright, before then nearly hitting a station building during rush hour on Tuesday.

Images show that the train was seemingly within inches of striking a building, having derailed at the busy north London Overground station on Tuesday morning.

According to Network Rail, the injuries reported are “minor” and the driver of the train is in “shock”.

Ellie Burrows, who is the Network Rail’s route director for Anglia, said: “At approximately 8.20am a train hit the buffer stops at Enfield Town at slow speed.

“The driver is being treated for shock and there are reports of a few minor injuries.

“Emergency services including the British Transport Police are on site and an investigation is under way.”

About 50 people were evacuated from the derailed train, with station staff helping passengers out of their carriages before the London Fire Brigade (LFB) then attended the incident.

Station commander Jim O’Neill, who was present at the scene, said: “The train had hit the buffers at the station, which is at the end of the line, and gone up over the top of them.

“Firefighters carried out a systematic search of the train to ensure there were no further people on board.

“Crews assisted station staff to make the scene safe, and a recovery operation will now be carried out.”

A worker from a nearby sorting office said that he was “shocked” by the sight of the crashed train, but added that the situation “seemed very much in control”.

Gary Spencer said that he did not hear the crash, but walked to the station from his place of work after seeing that dozens of emergency service vehicles were rushing to the scene of the crash.

“(There was) initially some shock but more importantly (I was hoping) that there were no casualties,” the 37-year-old said

“I have never known a train to fail stopping at the end of the line… if the metal steel was not behind the buffer I’m confident the train would have damaged the building.

“The situation seemed very much in control.”

A London Ambulance Service spokesperson has said: “We were called at 8.16am this morning to reports of a train derailed at Enfield Town railway station, Enfield.

“We sent a number of resources to the scene: one ambulance crew, an emergency planning officer, a clinical team manager, two incident response officers, medics in cars, and our hazardous area response team.

“Two people were assessed at the scene for minor injuries, but they were not taken to hospital.”

Three fire engines, as well as two fire rescue units were also sent to the scene of the train crash.

“Crews carried out a systematic search of the train to ensure no one was trapped,” LFB said.