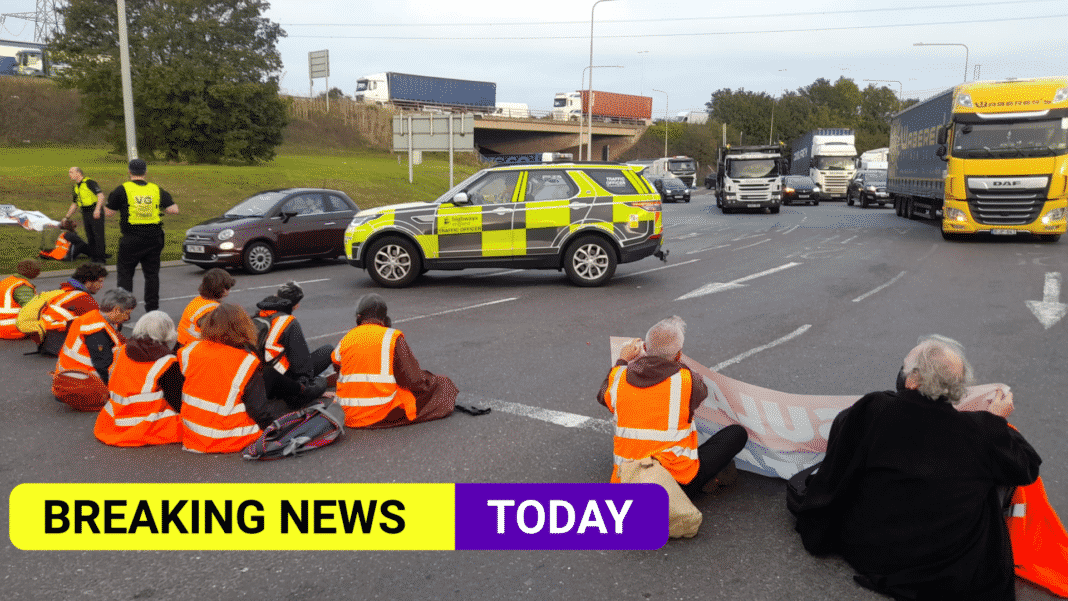 Police have made multiple arrests during the Insulate Britain demonstrations, with angry motorists often clashing with protesters

Insulate Britain has announced that it will “suspend its campaign of civil resistance” until the 25th of October, in an open letter written to the Prime Minister, Boris Johnson.

The protest group, which has been causing chaos by blocking major roads around London in recent weeks, said it would suspend the campaign “ahead of COP26“.

The campaign group has been causing chaos by blocking major roads around London.

Police have made multiple arrests during the demonstrations, with angry motorists often clashing with protesters.

Several injunctions against the climate protesters granted by the High Court in recent weeks means that anyone breaching the order by blocking the nation’s roads could face a prison sentence, the UK’s Transport Secretary Grant Shapps has said.

The climate change group said in its open letter on Thursday: “Insulate Britain would like to take this opportunity to profoundly acknowledge the disruption caused over the past five weeks,”

“We cannot imagine undertaking such acts in normal circumstances. But the dire reality of our situation has to be faced.

“We invite you to make a meaningful statement that we can trust… that your government will take the lead needed to insulate and retrofit our homes.”

Insulate Britain, which is an offshoot of Extinction Rebellion, wants the UK’s government to insulate all homes within the UK by the year 2030 in order to cut carbon emissions in the country.

The group has blocked roads on 14 days over the past five weeks, with activists often having glued their hands to the carriageway to increase the length of time it takes for police to remove them.

The latest Insulate Britain demonstration was near a busy industrial estate within Thurrock, Essex, on Wednesday morning.

Clashes between both drivers and protesters ensued after demonstrators had blocked the junction to St Clements Way and London Road.

This comes after Insulate Britain says around 50 people were involved in the demonstrations, which have also targeted Hanger Lane, Wandsworth Bridge and Arnos Grove. Insulate Britain protesters have blocked three major routes in London, including the Blackwall Tunnel.

Police then later arrived to remove more protesters from the roads. Essex Police said that 35 people had been arrested.

Insulate Britain has previously admitted that its actions on the M25 were “in breach” of an injunction that was obtained by the government via the High Court last month.

People who break these injunctions can be found to be in contempt of court, but the protests proceeded to continue as prosecutions usually take several months.