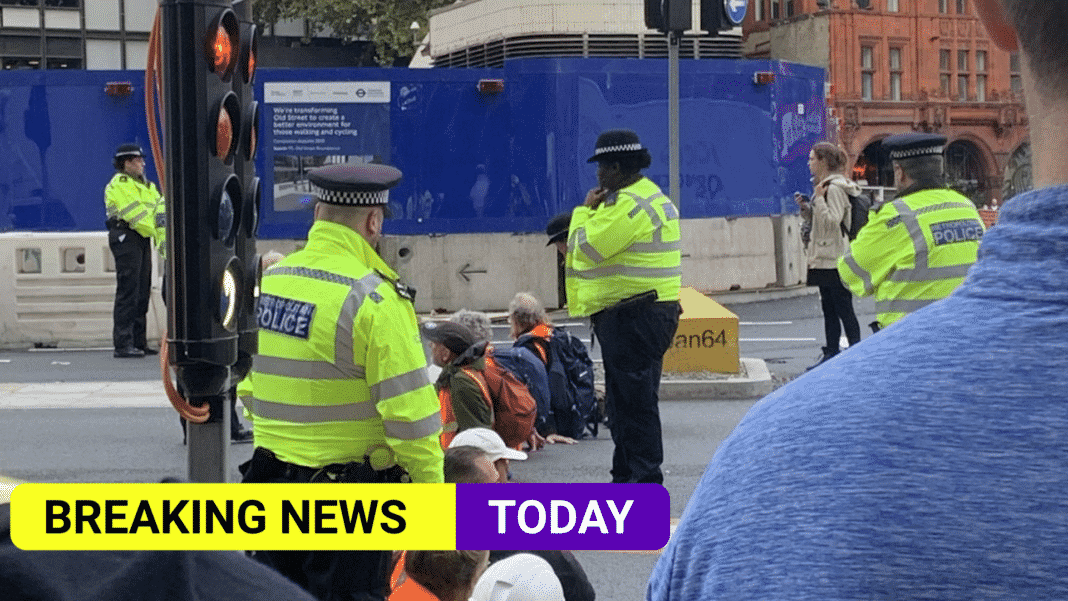 Insulate Britain protesters have been arrested after blocking M25 again, in breach of injunctions

Insulate Britain protesters have yet again been arrested after returning to the M25 despite the injunctions that were granted against them by the High Court.

The protest group returns to the M25 despite National Highways being granted an injunction, meaning anyone breaching the order could face a prison sentence.

Around 40 people had blocked the M25 at Junction 31 and the London Road A1090 near the Dartford Crossing on Wednesday morning, which is the thirteenth time that the group have staged such a protest.

With demonstrators having been dragged out of roads near a busy industrial estate in Essex, clashes have ensued between protesters and angry motorists.

Protesters have blocked the junction to St Clements Way and London Road, in Thurrock, which has forced multiple vehicles including HGVs to stop and turn round.

Vehicles blasted their horns as members of the public got out of their cars to confront the climate protesters, who had laid down in the roads in front of them.

Some activists were physically dragged out of the road before immediately returning to their positions in the road, only to be dragged away again by the frustrated drivers.

Responding to the incident on the roads, Essex Police said: “We are currently on scene and have made arrests following reports of people blocking the slip road of the M25 in Thurrock.

“We received reports of people on the road at Junction 31 shortly after 8.25am today.

“Officers were at the scene within five minutes and are currently working to resolve the situation quickly and safely. Arrests have been made.”

The High Court has granted the National Highways several injunctions against the climate protesters from blocking sections of the M25, as well as other major transport routes in recent weeks.

The injunctions mean anyone breaching the order could face a prison sentence, Transport Secretary Grant Shapps has said.

But despite this, the group returned to the M25 on Wednesday to demand that the government insulate homes in the UK ahead of winter, starting with the poorest.

Dr Diana Warner, an Insulate Britain supporter, said: “Many people are going out of their way to thank us. Some come out of their cars to thank us, some are police officers involved with our arrests. To them, we bring hope – we haven’t yet given up. We are still pushing for life saving changes.”

This comes after Insulate Britain says around 50 people were involved in the demonstrations, which have also targeted Hanger Lane, Wandsworth Bridge and Arnos Grove. Insulate Britain protesters have blocked three major routes in London, including the Blackwall Tunnel.

“It is a big step to move from thanking us to taking action. But if you make some move to help us, however small, you will be helping us to achieve change.”

The group said on Wednesday that the action is coinciding with the release of a report by the charity Shelter, which found the health of 22% of renters in England – or 1.9 million households – is being harmed by poor housing.

The report said people are living in homes “that make them sick because they are mouldy, cold, unaffordable and grossly insecure”.