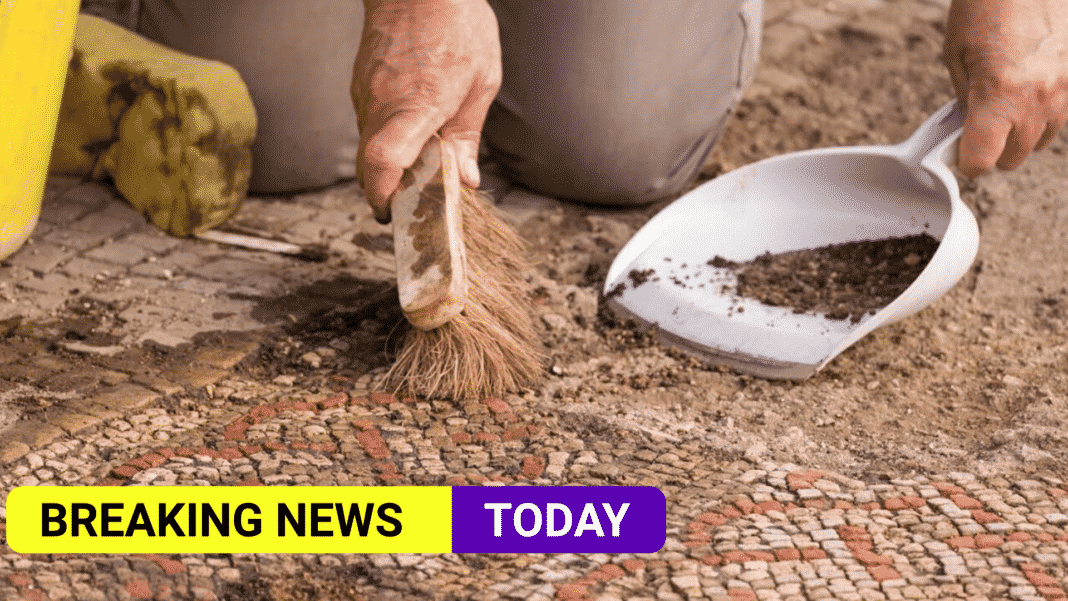 The mosaic, that was found in Rutland, has been described as being the first example of its kind in the UK.

It was discovered by the son of the landowner and has now been investigated by archaeologists from the University of Leicester.

Historic England has described the mosaic as being “one of the most remarkable and significant… ever found in Britain”.

The mosaic, as well as the surrounding villa complex have now been protected as a Scheduled Monument by the Department for Digital, Culture, Media and Sport (DCMS) on the advice of the organisation Historic England.

Urgent excavation work was then carried out at the site following unusual pottery having been discovered nearby.

Jim Irvine, who is the son of landowner Brian Naylor, made the initial discovery after spotting “unusual pottery” during a walk amid the 2020 coronavirus lockdown, he then contacted the archaeological team of Leicestershire County Council.

He said: “My family have been farming this land for 50 or 60 years.

“During lockdown last year, I noticed some pottery on the ground which didn’t look like any pottery I’d seen before.

“We came down here with a spade and I dug a shallow trench and I was in exactly the right place.”

Historic England then funded urgent excavation work at the site by the University of Leicester.

The mosaic, which forms the floor of what is thought to be a dining or an entertaining area within the villa, measures 11m x 7m (36ft x 23ft).

Mosaics were regularly used in private and public buildings across the Roman Empire, and often featured famous figures from mythology.

However, the Rutland mosaic is thought to be unique in the UK as it features Achilles and his battle with Hector at the conclusion of the Trojan War.

The mosaic is considered unique because of the scenes it depicts

Investigations have revealed the large villa is surrounded by barns, circular structures and possibly a bath house.

The complex is likely to have been occupied by someone with a knowledge of classical literature, between the 3rd and 4th Century AD.

The mosaic formed the floor of a dining or entertaining area

John Thomas, deputy director of the University of Leicester Archaeological Services and project manager on the excavations, said: “This is certainly the most exciting Roman mosaic discovery in the UK in the last century.

“It gives us fresh perspectives on the attitudes of people at the time, their links to classical literature, and it also tells us an enormous amount about the individual who commissioned this piece.

“This is someone with a knowledge of the classics, who had the money to commission a piece of such detail, and it’s the very first depiction of these stories that we’ve ever found in Britain.”

Discussions are ongoing about setting up an off-site display.

This comes after more people who were making the treacherous journey across the Channel from France have been brought ashore by UK authorities following what has been the deadliest day of the current migrant crisis.

Duncan Wilson, chief executive of Historic England, added: “To have uncovered such a rare mosaic of this size, as well as a surrounding villa, is remarkable.

“Discoveries like this are so important in helping us piece together our shared history. By protecting this site we are able to continue learning from it, and look forward to what future excavations may teach us about the people who lived there over 1,500 years ago.”

The site is on private land and not accessible to the public but discussions are ongoing with Rutland County Council to set up an off-site display of the villa complex and its finds, Historic England said.

Further excavations are planned on the site in 2022.

The discovery of the Rutland villa will be featured as part of Digging for Britain on BBC Two and iPlayer in early 2022.