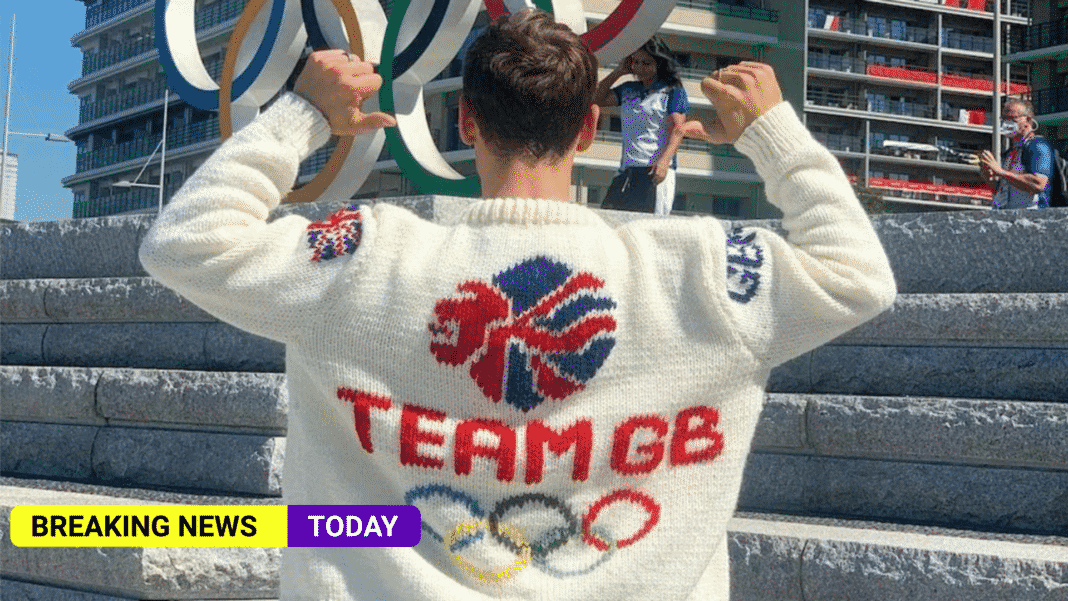 Tom Daley has shown off his hand-knitted Team GB cardigan, raising thousands in donations for The Brain Tumour Charity

After images of Tom Daley knitting poolside at the Olympics went viral online, the Olympic gold-medalist diver has shown off his new finished project while raising money for a touching cause.

The Team GB gold-medallist had captured the attention of Tokyo Olympics viewers not only for his excellent Olympic champion diving ability but also for his attentive knitting skills at the side of the Olympic pool.

Daley is now using his creative hobby to raise thousands for The Brain Tumour Charity in memory of Robert Daley, his dad, who had passed away after a battle with brain cancer. He has since raised over £6,000 in donations for the charity.

Over the past week, Daley has been conscientiously hand-knitting a cardigan that features the Team GB logo, as well as the Olympic rings on the back, with the Union Jack on the left shoulder of the piece, ‘GBR’ on the right shoulder, and Tokyo written in Japanese characters on the front of the cardigan.

Posting on his personal Instagram page, Tom Daley wrote: “When I got to Tokyo, I wanted to make something that would remind me of the Olympics to look back on in the future.”

“I designed a pattern for the colour work that would signify everything about these games!”

Sharing the finished piece, he asked his followers to consider donating to his fundraiser for The Brain Tumour Charity.

Daley is raffling off another one of his designs in order to raise money for the charity, with each entry costing £2. He wrote on his fundraising page:

“I will be raffling off lots of things over the coming months so keep your eyes peeled.”

Tom Daley is a prolific knitter, and has even a dedicated Instagram page for his creative work. During the Olympic Games, he has also knitted a case that he uses to hold his Gold medal.

Daley’s father, Robert Daley, died in 2011 at the age of 40 following a battle with brain cancer. Robert was often alongside his son at the poolside and during his press conferences when he was a young teenager, and sadly died before he could see his son compete at the 2012 Olympic games.

This comes after Sky Brown, aged 13, has won an Olympic bronze medal in the women’s skateboard event, making her Great Britain’s youngest ever medallist, as Katarina Johnson-Thompson found herself out of contention for a podium place in the heptathlon.

After Tom Daley’s Gold medal win last week, he said about his dad: “I know would have been extremely proud how I have become Olympic champion. It was always our dream growing up.”

Daley’s journey in the sport of diving began back in 2001 after he went to a “local diving pool and thought it was cool to see divers doing somersaults on the board.”

He “pestered” his father to take him to the diving pool, and later he would accompany him to “every training session, every competition, he was always there”.

Daley’s fans are extremely supportive of his knitting projects, with one commenting: “Following the knitting progress more than the Olympics itself at the moment!”